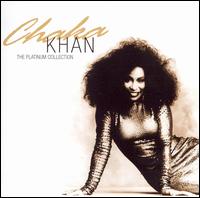 IT'S DIFFICULT to believe that much of the power, strength and soul that you hear when you hear Rufus stems from anyone as petite and ...

Chaka Khan: The Low Down on Chaka

I DONT know whether you've ever done a phone interview, but they can be bitches. This one was rather that way inclined, owing as to ...

NOW THEN, an album which the whole team involved has obviously spent a good deal of time thinking about. Chaka Khan needs songs which exploit ...

OVER THE years, we have covered just about every possible facet of Chaka Khan's career. So, during a break whilst recording a new album with ...

NEW YORK — "I can read your thoughts right now, every one from A to Z," sings Chaka Khan in her current hit, 'I'm Every ...

CHAKA KHAN is known for the biggest mouth and the funkiest abdominal scar on the soul scene and what's more there was a time when ...

Naughty is the title of Chaka Khan's new album, but she denies trying to project a 'naughty' image. However, she confesses to being naturally impish ...

Chaka Khan: What'cha Gonna Do For Me (Warner Bros)

WHAT CHA' Gonna Do for Me is a textbook example of how to make incredibly pedestrian "fusion" music and pass it off as jazz for ...

TWO CREWS, two solo artistes, SOS and Skyy occupy the amorphous middle ground between Clinton and Kool — no coke psychosis on the one hand, ...

Chaka Works The Crowd But Doesn't Wear The Crown ...

Chaka Khan: I Feel For You (Warner Bros.)

"For five years I've been really working at creating masterpieces. Now I do a song and put rapping on it — which is really the ...

THIS ALBUM IS simply staggering, as magnificent in finished form as its conception is bizarre. Imagine, if you will, the highlights of a singer's career ...

Interview by John McCready, The Face, 1989

CHAKA KHAN, the smooth voice of early '70s soul, has been thrust back into the limelight with a new dance cut of her hits I'm ...

D Mob: Mixing With The Mob

LIKE A DRUG, dance music needs harder and harder hits to sustain the same level of pleasure. What would have been a seismic drum track ...

IF I HAD any say in what Chaka Khan recorded I'd go in the studio with her and a bunch of top musicians and play ...

The Artist Formerly Known As Prince did his best to stop Caroline Sullivan seeing his Wembley gig. When she sneaked her way in, this is ...

Chaka Khan's Forum concert might have been canceled but she's still eager to jump back into the music scene. ...

Chaka Khan: Back...From Back In The Day

LOS ANGELES, October 11, 2007: I've been talking to Chaka Khan since 1974. Through the years, I've been a witness to her through-the-fire-days, her almost-have-it-together-days, ...

Ch-arge of energy from Chaka bursting with life and joy ...