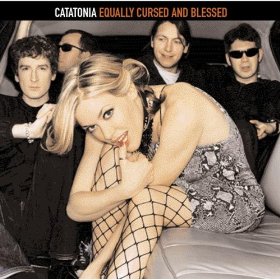 Catatonia: Welsh Pioneers Come Into Their Own

THESE DAYS, when it seems you can't throw a stick in the music industry without hitting a Welsh act, Catatonia are in the unusual position ...

Catatonia: The Hit-Man And Her

Cerys from CATATONIA is on first name terms with hit men while the rest of the band are into mafia-type shenanigans. Blimey! Best not call ...

YOU LEAVE more alive than you came. You leave with your secrets not just repeated but monumentalised. You never wanna leave. Catatonia are better. ...

CATATONIA's last single was about "mobs" — no it's sci-fi doodlings! We hotfoot it to Wales and ask them what the hell's going on ...

They're about to break through, they're ever so Welsh and their singer is losing her voice on the first date of the tour... ...

I DON'T CARE what people say about her; I think that Cerys Matthews, the lead singer of Welsh outfit Catatonia, is a really nice bloke. ...

Virtually unknown a year ago — 12 months later Cerys Matthews is voted the sexiest woman in rock in a Maker poll. How'd that happen!? ...

Catatonia At The Brixton Academy

'EVERY MORNING when I wake up, I thank the Lord I'm Welsh,' sings Catatonia's Cerys Matthews, and 3,000 people sing it back to her, voices ...

Catatonia: Glowing In The Dark

Live Review by Caroline Sullivan, The Guardian, 31 May 1999

RED DRAGON flags, rugby shirts and the strains of 'Road Rage' drifting across the moist night air — it could only be Wales's second-biggest band ...

Cerys Matthews: "I'll end up a spinster, like my role model Anne Widdecombe"

A year ago, after a rumoured nervous breakdown, a rift within the band and a cancelled tour, the music press had consigned Cerys Matthews and ...

CERYS MATTHEWS slung a guitar round her neck and strummed a few chords. Then something caught her eye. She stopped and stared. Her jaw dropped. ...

The return of Cerys Matthews

CERYS MATTHEWS, Britpop's very own Princess of Wales is back. The former Catatonia singer escaped to a new home in Nashville at the start of ...