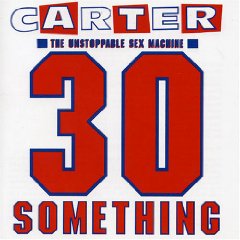 "I DUNNO, REALLY. We just looked at a pot of jam on the table and thought, 'Let's call it Carter The Unstoppable Sex Machine'. No, ...

CARTER (THE Unstoppable Sex Machine) are a belch from the past – recalling a time when bands laced their songs with ‘realism’. ...

A Top 20 Single in Britain, feted in the USA and Japan...Suddenly Carter are hot. But it's been a long, hard haul for this duo ...

Carter The Unstoppable Sex Machine: At Home With Carter

Carter can't seem to stay out of the headlines – but they're valiantly resisting the pressures of fame. Stephen Dalton toured Fruitbat's new house. ...

Never mind the music, it's the T-shirt that counts these days. Bruce Dessau reports ...

"I WAS born under a wandering star/In the second council house of Virgo/Forcibly removed from the belly of my ma/And raised on milk and Pernod". ...

From The Kinks to Carter, Bowie to Blur, the Small Faces to Suede, British pop groups have eulogised, mythologised, criticised, glamorised, immortalised, romanticised and agonised ...

CARTER USM have been held back by their following's anti-pop element — a minority who can't accept that their heroes don't want to kill pop. ...