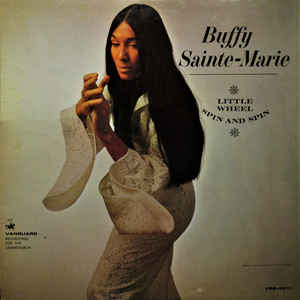 Ms. Sainte-Marie talks about making art in the digital domain: creating music and pictures on computers, the importance of technology to artists, having her own website; working online with indigenous American communities; her early musical experiences; revisiting older material on new album Up Where We Belong; on 'Soldier Blue', the song and the film; and being part of Sesame Street.

Once again rebellious young rock 'n' rollers have turned exclusive Newport into a riot city of jazz and festival From LILLIAN ROXON, who visited Newport, U.S., ...

BUFFY SAINTE-Maric is one of the most unique performers around. Possessing an almost incredible voice which ranges from the deep blues tones to the pure ...

Big Pink Is Just a Home in Saugerties ...

Buffy Sainte-Marie: The Best Of… (Vanguard)

BUFFY SAINTE-Marie is one of the special ones. She's one of the few performers guaranteed to move me to tears, and side two of She ...

TINA TURNER apparently has some new competition in the ethnic carnality sweepstakes. In the quickest turn of plume since Sacheen Littlefeather showed up in Playboy, ...

WHEN BUFFY ST. MARIE is good she is very, very good, and when she is bad she is horrid. It is her misfortune that her ...

"HI, IT'S Buffy St. Marie here. How are you?" The call came through some 48 hours after it was expected, rousing this writer from a ...

BUFFY SAINTE-MARIE came to prominence during the folk era, hoisted to underground approval on the virtue of her classic ‘Universal Soldier’ and her first album ...

IT TOOK ME a while to figure out where Buffy Sainte-Marie was at with Soldier Blue. ...

A CRASH course in Buffy history reveals that she has made 14 albums since the start of her career in the early '60s, when she ...

Retrospective and Interview by Colin Irwin, The Guardian, 31 July 2009

ALL GUSHING JET-black hair, radiant smiles and shining eyes, Buffy Sainte-Marie looks fabulous. "Do I? Why thank you..." ...

DON'T TELL THE wife, but I've fallen for Buffy Sainte-Marie. She probably doesn't feel the same way about me, but then being well-versed in the ...