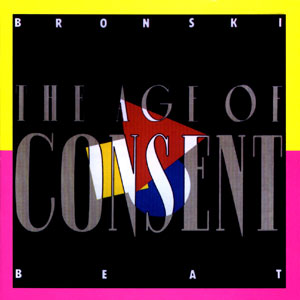 The two-thirds Glaswegian trio talk about their relationship with the press: homophobia, and the fixation with their sexuality; not being a conventional band, and the developments in electro pop; Jimmy Sommerville discovering his voice; 'Small Town Boy'; on being a trio, and their stage show; the US release of album The Age of Consent; being gay in Glasgow, and on the London gay scene; the importance of Tom Robinson; Jimmy's lyrics, and on looking forward to their US visit.

Bronski Beat are young, talented and they've only played a handful of concerts. And suddenly everyone's asking them questions. Questions about their "stance" as a ...

HERE'S a great game, boys and girls. The idea is to see how pale a pop group's other songs seem when set alongside their massive ...

THE BRONSKIS have a knack of being roped in to playing unconventional venues but they always manage to cut through the atmosphere. ...

Bronski Beat: Dark Side of the Beat

After the haunting 'Smalltown Boy' BRONSKI BEAT take sexual politics right to the edge with their daring new single, 'Why'. In America completing their debut ...

SUNDAY, 'ROUND about lunchtime, and Jimi Bronski is scurrying around his small council flat in a vain attempt to clean up the mess. I stand ...

NOW THAT FRANKIE HAS PROVEN TO BE a remote-controlled sham with less depth (not to mention stage presence) than its sloganeering T-shirts, the gay-rock mantle ...

What Is Bronski Beat?

Profile and Interview by Barney Hoskyns, Spin, May 1985

MEET WHAT IS perhaps the first real gay group in the history of pop. They’re not drag queens, not even sure they want to be ...

Jimmy Somerville: The Age of Dissent

I'M NOT ENTIRELY SURE we should approve of this sort of thing. When a band of status splits up it's general record company policy to ...