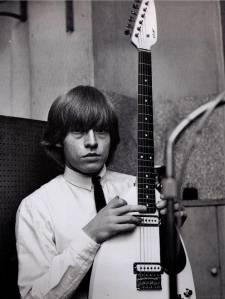 Brian Jones and Anita Pallenberg: A Love Story About A Stone

ROLLING STONE Brian Jones is thinking about getting married. He said so in a recent interview. But, until a few weeks ago, no girl had ...

Rolling Stones: Brian Wants To Swap His Rolls For A Mini!

A SHRILL whistle cut down a Chelsea mews and Brian Jones appeared at the door of his house. I parked my Volkswagen next to his ...

CHELTENHAM: A place of many memories. But it's a drag. ...

Brian Jones: The Case of the Disappearing Image

Weird, long-haired, almost mythical — Brian Jones was once the most talked-of and popular Stone. He enjoyed playing the great lover, mingling in London's popland, ...

Former guitarist with the Rolling Stones ...

THE DRUGS, THE GIRLS, THE HANG-UPS ARE SUPERFLUOUS TO THIS OBITUARY. LET US REMEMBER HIM FOR WHAT HE WAS... ...

Brian, the Stone in the Headlines

BRIAN JONES is dead — and his death in the swimming pool of his Sussex home last week was as dramatic as his last five ...

Not just a guitarist for the Rolling Stones, but an embodiment of the music itself. ...

Ten Years after his death, a re-appraisal of the life and times of the Rolling Stone who was crushed by success ...

Master Musicians of Jajouka: Stoned on the best Moroccan

Rolling Stone Brian Jones was intoxicated by the music of the Master Musicians of Jajouka, says David Toop. Now they are in London. ...

Without guitarist BRIAN JONES, there would have been no Rolling Stones. And yet the golden boy of the '60s was also the first rock casualty ...