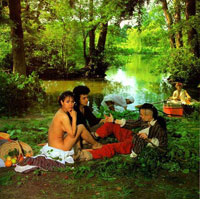 Pop, that disposable distraction, is mostly about transience: it’s the order of the perpetual child, the moment! Not that those last long these days. Most ...

A meal on wheels... and it's finger-lickin' good, sez PHIL SUTCLIFFE ...

Interview by Chris Salewicz, The Face, May 1981

You're dealing with a very low level of creativity in the music business. The man who sits in his office marketing records is not a ...

WITH A LITTLE embroidery Annabella Lwin's story could be a classic show business myth: Discovered working at a dry cleaners, an ordinary 14-year-old girl becomes ...

Malcolm McLaren, the shaker and baker of British punk, turned the Sex Pistols into an epochal event, turned Adam Ant around and now plays Svengali ...

THE STORY has to begin with Malcolm McLaren, the ex-Kings Road clothier who brought the Sex Pistols to the world. Having seen his punk rock ...

Bow Wow Wow: When the Going Gets Tough The Tough Get Going (RCA)

PERSONALLY, I never lost a minute's sleep over 15 1/2-years-old-and-semi-nude Annabella's supposed exploitation at the hot little hands of Malcolm McLaren when he was pushing ...

Child Stars: We Blame The Parents!

IT'S TEMPTING TO imagine that Kenny Laguna invented the lifework he chronicles in the songs and liner notes of Laguna Tunes, that this parade of ...

Annabella Lwin: What She Likes