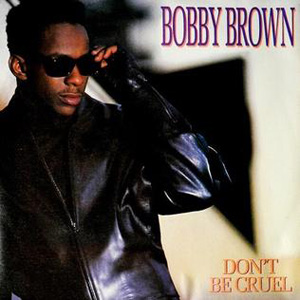 THE ALL-SINGING, ALL-DANCING WUNDERKIND IS CURRENTLY THE FASTEST RISING STAR IN AMERICA WITH HIS DEBUT ALBUM DON'T BE CRUEL. AT ONLY 20 HE IS SET ...

Profile and Interview by Mark Cooper, The Guardian, 23 June 1989

He came, they saw, he conquered... Adam Sweeting on Bobby Brown at the Wembley Arena ...

SEX AND HUGS AND RIGMAROLE ...

AT 11 O'CLOCK on Friday June 30, shoppers in Oxford Street's HMV Records noticed a growing number of predominantly female teenagers filing into the store. ...

Will the Jack of Swim be the next King of Soul? ...

Coming over lewd and clear ...

BOBBY BROWN may be less obsessively single-minded than Prince (he doesn't write/produce/sing/play every last note on his records), and Michael Jackson surely beats him jewel-encrusted ...

From US slick to British snooze ...

IF AIN'T BROKE don't fix it. Working with Teddy Riley and L.A. & 'Face worked pretty well for Bobby Brown first time round and my ...

New Edition: Houston? We Have No Problem

The Rolling Stones? Pah! The Beatles? Forget it! They're nothing compared to NEW EDITION (remember '80s classic 'Candy Girl'?). Or so founder member Bobby Brown ...