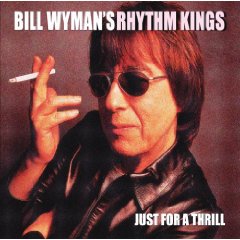 Bill Wyman Solo: It's Me, Such As I Am

THE NIGHT BEFORE, Bill Wyman had been in a studio making a short promotional film for his debut solo album, Monkey Grip, released May 15th. ...

Bill Wyman Solo: "Happier in The Stones Because I Have This Outside Freedom"

"I'VE BEEN in this band so long that if I haven't sung for a long time, I can't sing. If I haven't written a song ...

WHAT CAN you say about an album that contains contributions from Joe Walsh, Van Morrison, Nicky Hopkins, Ron Wood, Al Kooper, and Dr. John to ...

WELL, HERE HE comes again. Bill Wyman, on face value the least likely Stone to strike out on his own account and yet, apparently, the ...

The Back Line: Bill Wyman and Charlie Watts

IN A SMOKY CUTTING ROOM on Sunset Boulevard, the entire history of rock and roll flashed before my eyes: Elvis, Chuck Berry, Buddy Holly, Little ...

Who the hell does Bill Wyman think he is?

WITH SOME 15 minutes to go before the appointed end of our 60-minute afternoon session, your reporter is having a decidedly sticky moment with Bill ...

BILL WYMAN is one of only two former Rolling Stones still...well, rolling around – the other, of course, being Mick Taylor – but he is ...

OVER THE COURSE of the last forty years probably more column inches of copy have been dedicated to the cavalier exploits of the Rolling Stones ...

THE LEGENDARY STONES BASSIST ON HOW HE NEVER GOT THE CREDIT(S) HE DESERVED ...

Bill Wyman: "I can't live off the Stones royalties"

BILL WYMAN IS sitting in a booth at the back of his Sticky Fingers restaurant cuddling a beautiful young girl called Matilda. ...