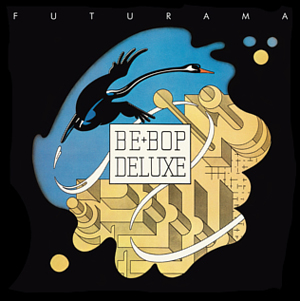 From his school band the Cosmonauts through to latest Be Bop Deluxe album Drastic Plastic, Nelson tells the whole story: teen bands; conversion to Pentecostal Christianity; forming the band, signing to EMI and recording debut Axe Victim; changing the band's line-up, and record producers... not forgetting his perpetual self-doubt.

IT'S GREAT to be right in there on the first still-to-be-perfected artistic utterance of A Truly Great Group To Be. That old warm self-congratulatory glow ...

THE FIRST THING that hits you when you see Be-Bop Deluxe in their current incarnation (or, for that matter, listen to said incarnation's Futurama album ...

FIVE YEARS AGO in the bleak Northeast England town of Wakefield a guitar player named Bill Nelson sat around rapping with some friends who owned ...

SANTA MONICA CIVIC is not the best place to see a rock concert in Los Angeles. It's got about as much rock atmosphere as the ...

BILL NELSON, IF popular opinion is to be believed, is destined to become something of a superstar in the coming year. And the new Be-Bop ...

AT £2.50 a ticket I was expecting to hear the words, particularly from a group whose lyrics are so important, but the thousand or so ...

LONDON'S BURLINGTON Arcade runs up the side of the Royal Academy. It has high gates at either end and boasts some of the most expensive ...

SANTA MONICA Civic is not the best place to see a rock concert in Los Angeles. It's got about as much rock atmosphere as the ...

Every British band knows it: only American success buys the Bentleys. Be Bop Deluxe, Steve Harley and Ian Hunter have all had their stateside ups ...

The Dangers Of Being Likeably Listenable ...

"THE AMERICAN interviewers have been saying, 'Hey, are you going to wear the suits again this time?' and I say, 'We've worn them the last ...

For a while there, Be Bop was one of the great post-glitter hopes from Britain. The first trio of albums displayed Bill Nelson as a ...

GOING TO The Shrine in sleazy downtown LA is a bit like going to the pictures, a sort of giant Odeon with lumpy seats and ...

IN ADDITION TO releasing five studio albums in as many years, Bill Nelson's modernist/ futurist art-rock ensemble found space in their diaries to regularly visit ...