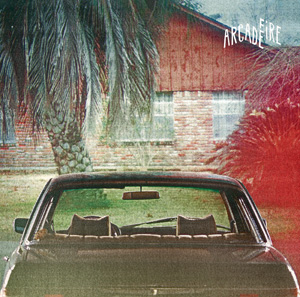 Mr. Butler talks about the band's touring lifestyle; working on new songs for their second album; the way they are received; their live show; being praised by David Bowie; his musical grandparents, and their influence on him, and meeting his wife and fellow bandmember Régine Chassagne.

WHILE EVERY THIRD BRITISH BAND mines 1979-80 post-punk, Arcade Fire, from Canada, have stolen a march by investigating the US "no wave" of the same ...

WE WERE LATE, and lost. We took the lift and arrived at the wrong floor. I asked a white-shirted boy where the band were. Which ...

In such a time of emotional flux for the Arcade Fire; losing close family members, founder members getting married, recording an album of immense beauty, ...

Why the Arcade Fire are molten hot

Two weeks until Neon Bible hits the shops and the hype has hit Arctic Monkeys levels. But where are the sceptical critics to keep the ...

FORGET your wake adages: this isn't the post-Funeral party, the celebratory exhalation of relief following the enduring of an impossible to pinpoint pain. ...

Keep the Faith: The Arcade Fire

Love, death, religion, war: Arcade Fire explore such epic themes in so thrilling a fashion that critics, fans and their rock star peers find themselves ...

MONTREAL'S ARCADE FIRE are the band of the moment. To the critical mob and clued-up music fans, they are the fresh-faced heirs to the epic-pop ...

WHAT A difference a couple of years makes. Or do they? ...

Uncut has said for two years that the Arcade Fire are one of the best bands in the world. But how are they coping with ...

"I WOULD LIKE to think that in ten years' time, if people were to greet a new Arcade Fire album with that sort of build-up, ...

IF 2007'S NEON BIBLE was supposed to be Arcade Fire's difficult second album, it didn't show. Top marks from a cavalcade of critical tomes saw the Montreal ...

A FEW YEARS BACK, U2 used Arcade Fire's recording of 'Wake Up' to pump up arena crowds before they hit the stage. ...

The Arcade Fire: The Suburbs

IN MAY, WHEN news broke that Arcade Fire's third album would be called The Suburbs, one online fan posted a joke tracklisting featuring such numbers ...

Arcade Fire: "The clichéd rock life never seemed that cool to us"

Profile and Interview by Sean O'Hagan, The Observer, 28 November 2010

IN A CONCRETE room backstage at the Palau Sant Jordi arena in Barcelona, I am midway through a post-show interview with Arcade Fire's unfeasibly tall, ...

The dynamic duo behind Arcade Fire on charity, indie cred, and staying sane. ...

Arcade Fire: "It's a lot easier to get smaller"

WITH A No. 1 album on both sides of the Atlantic, Arcade Fire are on the verge of U2-scale stardom. But, ever the provocateurs, they ...

ARCADE FIRE's penchant for an album-uniting concept is nothing new. 2010's multi-award-winning The Suburbs arrived informed by its makers' upbringing, at the fringes of bigger-city ...

THE ALBUM COVER image of Rodin's Orpheus & Eurydice signals the theme of Arcade Fire's longest and most involved album yet: this is a work ...

Arcade Fire in Haiti: "I feel like it makes sense of me"

Report and Interview by Edward Helmore, The Guardian, 26 February 2014

WHERE WOULD Arcade Fire be without the woo-hoos and dense rhythms that characterise many of their best songs? Likely not in Jacmel, a Haitian coastal ...

LCD Soundsystem/Arcade Fire/St. Vincent: Is It Really Rock 'n' Roll Without Guitars? Yes, It Is.

Even as the tools of popular music evolve further from the analog to the digital, the spirit of the rock 'n' roll is as dangerous ...