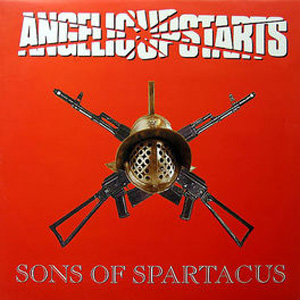 I WAS starting to think the whole thing had gone down the toilet. All the energy and the anger. Suddenly smart suits and cash register ...

"WHO KILLED Liddle?" On stage a tall young man wearing a police hat, white shirt, trousers and jackboots is down on his hands and knees. ...

THE BAND THE POLICE LOVE TO HATE INVITED TO DO A PRISON GIG? ...

HOW MANY p's in oppression? Aww, what can you say? Contrary no doubt to opinions expressed elsewhere on the subject, Teenage Warning is not an ...

NEWCASTLE'S Upstarts are already, for obvious and not so obvious reasons, being prepared by the vulture voyeurs as the successors to Sham. I'm not sure ...

INTOLERANCE FALLS like a heavy pall over the Angelic Upstarts – only they won't lie still and let it settle. Follow them round for a ...

THE MUSIC Press is a middle class toy, perpetually pampered, easily bored, easily bought off. It's too easy to sit pretty in your safe mortgaged ...

So who are you gonna be today then, Jim? The new Messiah or the little boy lost? Robespierre or the Urban Spaceman? An all-round good ...

EXTRAORDINARY. Quite extraordinary. This has got to be the most astonishing thing I've heard in months; a shock so devastating that I'm shaking still. ...

"COME HERE you!" bellowed Mensi across a crowded and quite respectable lounge bar. The reverberations thundered over the heads of the lunchtime clientele, their salads ...

Oi! and Skinheads: Coming a Cropper

A passionate defence of skinhead culture by GARRY BUSHELL. ...