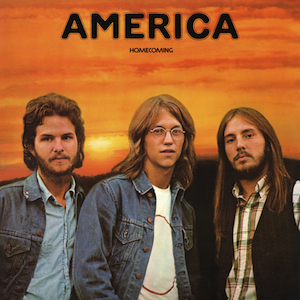 Dewey talks about meeting at school in London; the pleasures of working with George Martin; deals with the CSN&Y comparisons; on appearing on a David Cassidy album, and refutes the accusations of blandness.

America: If We'd Spent Years Playing Clubs, Our Music Could Hardly Be Fresh

IMPERIAL COLLEGE, London, was America's last gig before their current tour of the States. Backstage it was more than a little chaotic, with the dressing ...

THE WHISKY is not the ideal club for the debut of an acoustic band; one whose demands on its audience are more cerebral than physical. ...

WHAT HAVE WE HERE, O my sisters and brothers, but an album that serves as living proof that if you release 88 albums every month, ...

THE LAST THREE weeks have been something of a resting point for America. After returning from the States each of them split for a holiday, ...

This is David Geffen, by Gentlemen's Agreement Manager to the Superstars

Will CSN&Y ever re-unite and find true happiness? ...

IMAGINE IF YOU WILL, a kid that does a soul-wrenching ( I mean this literally) job of imitating Neil Young. The whiny little creep down ...

Come on. You didn't think ‘Horse With No Name’ and ‘Ventura Highway’ would get these guys voted into the pantheon of CSN&Y Springalopoco second-liners where ...

Grateful Dead: In the Wake of the Flood (Grateful Dead records, Import) New Riders Of The Purple Sage: The Adventures of Panama Red (CBS, Import)America: ...

America: What This Band Needs Is a Hat Trick

LOS ANGELES – To the crowd at the Hollywood Bowl, America could do – and did – no wrong. But to America, the concert was ...

MORE THAN any other group of the Seventies, America — in both its British and U.S. periods—has epitomized the stiff, soulless side of California pop. ...

Can An English Holiday Revive America?

LONDON'S SPEAKEASY club shares a bond with New York's Max's Kansas City in that they are both music business hangouts. But where the sickly red ...

America: St George To The Rescue

DEWEY BUNNELL stood in the middle of his Manchester hotel suite, scratched his beard, and grinned. An hour before, Dewey and a couple of his ...

America: The Making of 'A Horse With No Name'

The early '70s anthem of Californian hippiedom — all the way from Staines, Surrey. "A Satanic drug song? All I'd had was a cup of ...