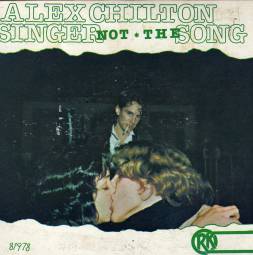 From the Box Tops and Big Star to Feudalist Tarts, the Memphis legend tells all the tales: about Chris Bell, drink and "trashy" drugs, Like Flies on Sherbert, the Cramps, trashing Ardent studios, his doubts about his songwriting, cutting out booze and washing dishes in New Orleans.

ALEX CHILTON is known for two things: 'The Letter', which he did when he was with The Box Tops, and his work with the legendary ...

CHAPTER THREE in the adventures of a bona-fide, under-acknowledged rock hero is currently in progress. At the moment, the story is mostly taking place in ...

Alex Chilton: Getting The Cramps Between The Box Tops And Big Stardom

ANY SELF-RESPECTING cultural elitist should know who Alex Chilton is, as should all hopeless old bozos still lingering on from the 60s. To recap for ...

ABSOLUTELY ONE of a kind, because, while archivists insist they wish that Jimbo was still here or that Syd would make another album, Alex Chilton ...

AFTER YEARS of maintaining a low musical profile, southern pop cult hero Alex Chilton's star may be on the rise again. ...

If anybody can really claim to be a living legend, ALEX CHILTON is the guy. From the Box Tops to Big Star to the booze, ...

LIFE has gone full circle for Alex Chilton. Seventeen years old in 1967, up to New York City from hometown Memphis where he fronted the ...

NO DOUBT about it, Alex Chilton is really hip right now, with bands like R.E.M., the Replacements and the Bangles citing his legendary early-Seventies group ...

Alex Chilton: Wildman On The Edge

In spite of his reputation as a cult artist, ALEX CHILTON likes to see himself in terms of a hit singles factory. Here he discusses ...

WHAT BECOMES a legend most? Taking drugs helps. Being renowned for a certain volatile temperament that involves smashing up studio consoles and putting your hands ...

Alex Chilton: Like Flies On Sherbert (Great Expectations/CD only)

WHEN BIG Star finally went under after their Sister Lovers (aka Third) LP failed to receive the attention it deserved at the time, a disgusted ...

Backwoods, Mississippi. Home to Jim Dickinson, the revered producer and professional redneck whose work spans the story of Southern music from Sun Records to Big ...

"WE HAD poetic furor," says Memphis scenester Randall Lyon, a key figure in Robert Gordon's new book about the music of his home town. "I ...

The Man Who Preferred Not To: Alex Chilton

IF EVERYONE who heard the Velvet Underground in the ’60s formed a band – so the joke goes – then everyone who heard Big Star ...

THE SUN IS going down on Memphis, site of rock’n’roll’s immaculate conception and explosive birth. On a warm spring evening, the Mississippi’s purplish-brown waters are ...

The Glory and Grandeur That Is Defeat: The Music of Alex Chilton

I. Entrance: On the Slopes of Parnassus ...

The Glory and Grandeur That Is Defeat: The Music of Alex Chilton, Part 2

IF THE FIRST ALBUM is soulful and unconscious, the second develops a narrator and player who find new voices, taking on consciousness, memory, and loss. ...

The little recording studio on Madison has played a big part in Memphis music history. ...

Alex Chilton: Out Of Time

A Beatles-obsessed quartet of '70s Memphis kids offering power-pop acid-drops for a soul label and a heavy rock public, Big Star were the ultimate misfit ...

South by Southwest: Where The Weird Get Going

The freaks were out in force in Austin, Texas, for the South by Southwest festival. Stephen Dalton revels in the music ...

Retrospective by David Cavanagh, Uncut, May 2012

Evil spirits. "Trotsky. Machiavelli. Sports. Astrology." Sessions with the Cramps and Tav Falco. Periods without shoes. Dishwashing and tree-climbing. And a heroic last stand against ...

Flies on Shit: Alex Chilton Goes Back to Memphis

Holly George-Warren: A Man Called Destruction – The Life and Music of Alex Chilton from Box Tops to Big Star to Backdoor Man (Viking)

IF EVERYBODY WHO heard the Velvet Underground in the late 1960s went on to form a punk group, it could be argued that everybody who ...